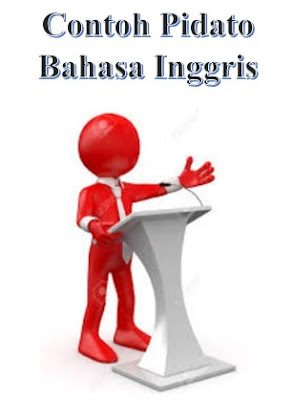 
With all due respect to the honorable judges, to the teacher from all Senior High Schools in

Bekasi, and all the audience here, ladies and gentlemen… Good Morning!!

First of all, let us thank Allah SWT because of his blessings, we all can gather here on thissunny morning. Shalawat and prayer, we will say to our greatest prophet Muhammad SAW,his family, his friends and his followers. Amen.

In this chance, I would like to tell you my speech that has the theme “Go Green!”

Saving Our Planet is a program that was persuading the earthlings so that they would becomemore concern and care to their entire environment. It was because the civilization that hasbeen created by the modern people in this millennium era had affected so many destructiveimpacts which are really needed to be concerned. These impacts are causing a new problem,The “Global Warming”. In prediction, that in the last 100 years the temperatures of our planethas increased by 1’ every year. Meanwhile, the ocean surface has increased for about 1 meterfrom its former level. The problem is, modern people not only wanted to increase theirprosperity, but also increase their rate of comfortable & luxurious life.

The situation was very different if we looked back to the last century where the pollution, theindustrial garbage, and the toxin gases were friendlier. Friendlier, because on the 19th Centurythe technologies improvement and the consumerism character was not yet significant. Orshould we say in this millennium era, the Earth exploitation and exploration were causing thecrucial problem for the earthlings.

How crucial the earth environmental problems we face are for example: The protectedanimals & plants from certain species nearly extinct, the plantation sector is causing anotherproblem for environment & ecosystem, forest logging without reboization, and the impact ofmines exploitation that cannot be recycled and maintenance of mine sector, etc. For us, theyouth generation is asking to the politicians and the government especially in Indonesia,“Why do those problems I mentioned left uncared without any preventive actions?” In fact,our ex-Minister of Environment of “Orde Baru” era Prof. Dr. Emil Salim has warned and gaveus an opinion about will happen on the next 20 years. He said that the situation will bedangerous if there are no actions to prevent this. We need the proactive steps to maintain thenature and to rehabilitee what we have disrupted from every department that is connectedwith the environmental cases and our community. The example about the impact of human’sgreed to the nature is The Lapindo Brantas case. That’s how the nature shows us their power.

There’s not even one human could stand against the power of nature. Until now, there are no

ways to stop the mud throwing and even the poisonous gases that is unwanted by the people.

We as the khalifah of the Earth can only begging, begging, and begging to the nature anddestroy the nature. But when we must give something to the nature or maintain the nature,we feel that we don’t want to! Is the nature retaliating our doings? When we think deeply overthis I guess the answer is “yes”, the nature is angry to us. The nature’s balance was reallydisturbed by the mortal’s hands and this behavior has spread widely over the world because ofour hedonism.

The question is “How”? How do we realize collectively for the world’s life so that so that the

Earth could become a better place to live…?

We as the youth generations, the lines of the civilization must be as one to create the vision &mission to help the government and the people for watching over the reboization program andfor the environment reparation that is caused by the industrialist and the people generallywherever they are. We as the youth generation without exception must be totally devote ourbodies & wills for the sake of healthy world, comfortable world, and for the sake of betterplace to live…

I suggest to the government and the people of Indonesia to plant the cambium plants or thepot plants on every one of the house garden. Everyone, every people must be responsible forevery single of plants. Imagine! If every people have 1 plant in one house, there are 200millions of plants in Indonesia. This is a very good step to begin our mission to prevent theGlobal Warming. Start this on any time now! For my recommendation, the sansivieras (one ofthe most beautiful pot plant) is really good to kept because of its great use of anti-pollutant &anti-free radical. Besides, its beauty will decorate our house so that we won’t feel bad to buy it.

Well, I guess that’s all I can tell. In the end, to show our devotion as the youngish, the lines tothe future, we must be balanced it with faith and taqwa because those are our capitol to realizeour wishes so that we can live in perfect harmony just as Allah SWT has confirmed to us.